Betsoft Introduces The Golden Owl of Athena with Buyable Feature

Betsoft Gaming brings to online casinos The Golden Owl of Athena, a five-reel video slot that offers free spins that players can buy.

The game took inspiration from Greek mythology, particular from the Athena whom the slot highlights as a goddess with an owl that can give players prizes. More than just an attempt to give bettors a glimpse of the belief of ancient Greeks, The Golden Owl of Athena holds common in-game bonuses like Wilds, on top of a set of buyable free spins – a feature not common among online casino slots.

“With The Golden Owl of Athena, we wanted to set a game in an under-served period of history and myth, and to build several rewarding slot mechanics around a single symbol. In the story of Athena and her namesake city, we saw a chance to create an experience with real personality, where a standout character could serve as the key to a series of features, and the guide to both a rich setting and a clear paytable. We believe players will love the game’s atmosphere, and that focusing on the golden owl will encourage everyone to explore its full suite of features.” 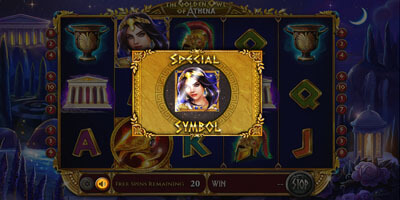 The Golden Owl symbol acts as the game’s Wild icon which substitutes for any symbol on the screen. Players will receive eight free spins when there are at least three Wilds on the screen. Furthermore, matching five of them will reward players with 20 free spins.

Players can trigger the Free Spins bonus at will with the Buy feature on the bottom right section of the slot. The Buy Feature gives players 20 free spins as if they matched five Golden Owl symbols.

The catch of the Buy feature is it costs 930 times the players’ bet amount. But using it, players can still extend the Free Spins mode when they match three or more Golden Owl symbols.

The Golden Owl of Athena slot is available in any online gaming hub that hosts Betsoft Gaming’s slot library. The game is compatible with both desktop and mobile devices, so players can spin the slot from the comfort of their homes or even on the go.